When you look at your Pommy, you probably don’t picture it pulling a sled. The Pom’s small size doesn’t bring images of intense work and endurance. However, these pups are descendants of some seriously hard working dogs from Arctic climates. Pomeranian’s were bred from these working dogs as early as the mid-18th century for companionship. Can’t picture how your four-legged friend went from sled-pulling to lap-sitting? Fear not. This post will answer the question what were Pomeranian’s bred for? 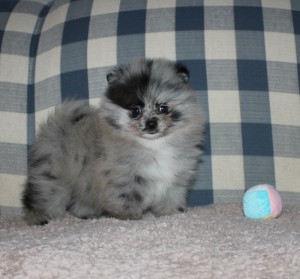 Believe it or not, Pomeranian’s are actually related to big, strong pups like Husky breeds, Alaskan Malamutes and Chow Chows. (The later of which is easiest to picture with all of that fluffy, thick hair!) This makes sense to many, as the Pom’s personality can oftentimes resemble that of a larger dog. All of these breeds and more belong to the Spitz family. “Spitz” is german for “pointed,” which refers to the distinguishable nose and muzzle of these fur babies.

The small dog that we now know as a Pomeranian started as a much larger dog, weighing an average as 30 pounds. The Pomeranian’s popularity increased in several stages, thanks to some British royalty who were serious Pom enthusiasts. In the mid-1700s, Queen Charlotte (wife of King George III of England) owned two large (by today’s standards) Pomeranian’s. It was not uncommon for royalty to include their pets in their portraits. Queen Charlotte had several paintings done of herself and her pups. Larger in size than the modern-day Pom, Queen Charlotte’s dogs still had very similar traits. Having these Poms in the paintings brought a greater awareness of these darling pups to the general public.

During this time, Pomeranian’s were bred for companionship in Europe. The breeding is thought to have taken place in a region called Pomerania, giving the familiar four-legged friend its name. This region stretched across part of Germany and part of Poland. It is here that the Pomeranian’s were bred down in size. But why make them smaller? We have another queen to thank for that idea.

A century or so after Queen Charlotte’s Pom portrait, her granddaughter Queen Victoria obtained her own Pomeranian. Her pup was tiny, like the Poms of today, and the people fell in love with this version of the Pomeranian. Queen Victoria was such a huge proponent of these pups that she established her own breeding kennel. The increasing popularity of Poms, and especially the miniature version, encouraged breeders to use only the smaller dogs for breeding. Queen Victoria also promoted Poms by importing and breeding different colours in her kennel. During her reign, the Pomeranian’s average size decreased by 50 percent.

The Pom’s weight range is three to seven pounds—much smaller than the original work dogs that they once were! It’s no wonder they gained their common European name, Zwergspitz, German for dwarf Spitz. Still, the Pomeranian maintains the pointed snout, long, thick fur and amicable personality of their Arctic ancestors.